A short conversation with Fran Fabrizio, the IT Core Director. 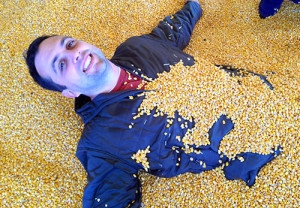 What’s the coolest thing you’ve gotten to work on at the MPC?

Perl. It wasn’t my first programming language, but it was the first language I truly loved. It’s messy but practical. It doesn’t concern itself much with appearances - it just gets stuff done. It has chameleon-like ability to morph itself into the tool you need at that moment. This seems to me to be a pretty decent approach to life.

When you’re not wrangling data at the MPC, what other things keep you busy? Mainly, my son - I’m pretty sure some sort of fusion reactor at his core is responsible for his ridiculous level of energy at all times. I also am getting more into biking (Minneapolis rubbing off on me, I guess) - I bought my first “real” bike last year and I’ve been trying to make the 11-mile commute to work as often as I can. I catch up with hockey late at night with the DVR.

What was the last thing you presented on / wrote about?

Scaffolding for a Growing Team: How to Introduce Structure Without Being Evil, at Surge 2014.

What new skill(s) are your currently trying to learn?

I try to dedicate time each week to keeping my technical skills sharp. I've been playing with some APIs (Google, Evernote) and Apache Spark lately.

« Take It and Run: A Tale of Risk, Failure, and the Beginning of a Javascript Journey
Archive
Ember for Rails Devs: Understanding How Ember Thinks »